Your Gateway to crypto news and insights 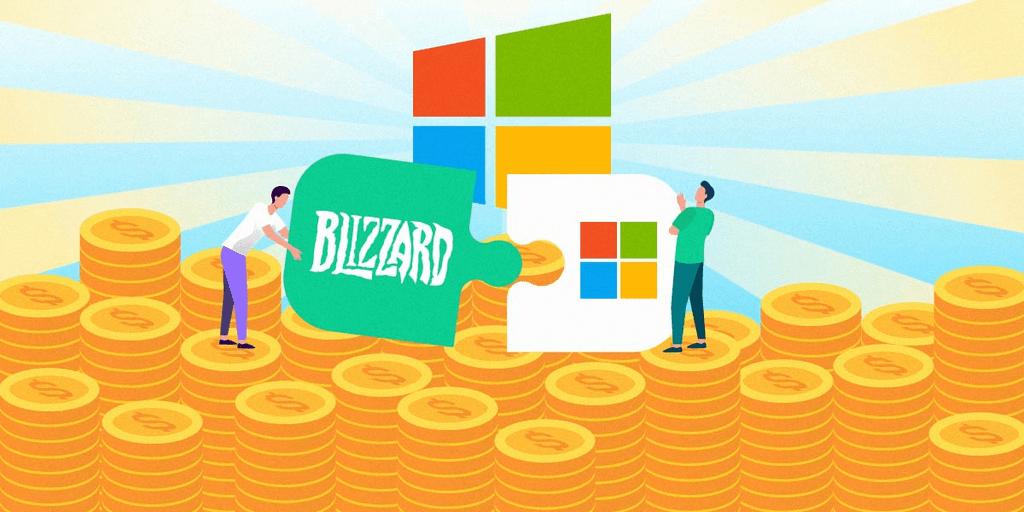 Following recent negotiations， Microsoft has acquired gaming powerhouse Activision Blizzard in a $68.7 billion deal where each share was bought for an impressive $95 a piece. Activision Blizzard is amongst several other gaming and tech-focused companies acquired by Microsoft in recent years， all of which are set to contribute to Microsoft‘s development of their own Metaverse， which is believed to pose as a contender for Meta in the coming years.

In previous years Activision Blizzard has endured scrutiny for the repeated reports of misconduct within their infrastructure - something in which Microsoft CEO, Satya Nadella, has pledged to reform， pledging that rebuilding Activision Blizzard’s culture is amongst his top ‘priorit【ies】’.

With ‘commitment’ and ‘hard work’， Nadella believes that Microsoft can restore the integrity of Activision Blizzard， as well as accelerate the development of Microsoft across various digital formats and the construction of their own Metaverse.

Despite producing some of the most dynamic and influential gaming experiences throughout the 21st century， Activision Blizzard has garnered a notoriety for misconduct and unprofessionalism.

In light of the acceleration of the MeToo movement over the past decade，Activision Blizzard has grappled with the repercussions of various official investigations and reports filed against the company by its female employees. As various alleged accounts of rampant sexual harrassment, alcohol spurred incidents, and the suicide of an employee after she was subject to harassment within the workplace - Activision Blizzard has reportedly fallen short of protecting their female employees.

Last October， a mea culpa was held by current CEO， Bobby Kotick， who reminisced on the progress of Activision Blizzard in terms of catalysing continuous technological development and its pioneering progression in terms of augmented reality， yet Kotick also reflected on those who were ‘deeply let down’ by the internal policies and procedures that failed to protect them.

Whilst Activision Blizzard‘s past may be corrupted with alleged strings of nefarious activity，Microsoft CEO, Sadya Nadella ，has openly addressed their past and how Microsoft will actively seek to rectify the past moving forward.

Microsoft has been consistently praised for their dedication to building an accommodating and supportive culture within the workplace，something in which Nadella is dedicating to introduce to Activision Blizzard through ‘commitment‘， ’hard work‘， and strong ’leadership‘.

With Nadella still appointing Kotick as the CEO of Activision Blizzard， even following the closing of the deal in early 2023， Microsoft is working alongside the company to revolutionise it’s culture， as well as collate ideas as to how they will collaboratively accelerate the development of modern gaming and technology.

Journalist， Jason Schreier，tweeted earlier this week in regards to the reception of this news from Activision Blizzard employees. Schreier noted the ‘optimism’ of employees， as this news brings hope of a new cultural reformation and increases ‘determination’ to keep reorganising and developing the firm to its full potential.

Why Did Microsoft Buy Them？

Microsoft has always been accredited for their contribution to gaming， particularly with the release of various generations of Xbox gaming consoles. However， with discussions of the Metaverse reaching mainstream consciousness and Meta’s gradual construction of an entirely augmented reality-based Metaverse， companies such as Microsoft are facing mounting pressures to rapidly evolve and contend with this new technology.

In order to continue addressing the demands of our current technological age， Microsoft desperately needed to expand it’s roster of companies and develop a new infrastructure that is Metaverse-ready - which is where Activision Blizzard comes in.

Activision Blizzard is renowned for the development of games such as Call of Duty， Overwatch， and Candy Crush and has consistently pioneered in terms of acquiring software developers， and reimagining the gaming landscape with immensely realistic graphics and engrossing gameplay.

With the two technology powerhouses working alongside one another， the pair are poised to roll out a range of new gameplay and augmented reality experiences that diversify the current offerings within the tech world.

Phil Spencer， executive of Microsoft Gaming， revealed in a recent Xbox post that this move will dramatically ‘accelerate 【their】 plans for Cloud Gaming’. Cloud Gaming is Microsoft’s means of offering increased interconnectivity to its users， enabling them to participate in gameplay across various devices， including phones， tablets， consoles， and computers.

Whilst Spencer teased the trajectory for Cloud Gaming， he refrained from divulging further information into how Metaverse technology will later play a role within Microsoft gaming consoles.

How is Microsoft Building Their Metaverse？

As Meta grapples for the upper hand with the development of Metaverse technology， companies such as Microsoft are vying to compete with their own comparable technology. This has been significantly exacerbated by the 100 reported incidents of Microsoft‘s augmented reality employees leaving over the past year to work for Meta.

Microsoft‘s dedication towards increasing connectivity is propelling it’s other applications besides gaming， including ‘Teams’，an application that has gained international traction as the pandemic has reimagined remote working culture. Nadella emphasised in a release earlier this year that ‘Teams’ will soon offer users the ability to generate digital avatars and partake in immersive augmented reality experiences.

Whilst ‘Teams’ is typically reserved for remote working and schooling， an integration of Metaverse technology could enable a range of newfound opportunities for those solely engaging in online work. This technology has the potential to construct a working culture outside of the office that enables connectivity between employees or students，particularly as the Covid-19 pandemic ensues.

However， Microsoft is not limiting itself to one form of development. With the support of Activision Blizzard‘s extensive catalogue of games， Sadya Nadella believes that ’distribution barriers‘ will be dissipated， particularly as the importance of merging physical and digital worlds becomes more integral to Metaverse development and adoption.

Recognising that Activision Blizzard lacked the capabilities to construct a ’rich‘ Metaverse alone， Kotick remarked upon the ever-growing race to build the integral components of a Metaverse.

As Kotick stated： ’The race is accelerating, and the resources required for success are enormous.‘. Yet Kotick has faith that Microsoft possesses the capabilities to construct an innovative Metaverse infused with valuable and revolutionary technology.

In light of this historic acquisition, there have also been several rumours that Microsoft may be beginning to dabble into the world of NFTs. As more companies scramble to buy and produce their own NFTs, Microsoft has broken ground within the NFT space by providing funding to support the development of the carbon-neutral blockchain Palm NFT Studio.

Whilst Microsoft is yet to disclose whether they will venture into NFTs with the support of Activision Blizzard, various critics believe that due to Microsoft’s previous collaboration with Enjin, NFTs may be nearer in the future than previously anticipated.

Enjin has accrued a significant lead within the NFT gaming industry, gaining an edge on competitors with their newfound Polkadot para chain slot, enabling increased access to a variety of NFTs and gaming experiences.

As Microsoft continues to diversify its involvement with different firms, various new opportunities within the crypto space could rear their head across the next year.

Author: Matthew W-D, Gate.io Researcher
*This article represents only the views of the researcher and does not constitute any investment suggestions.
*Gate.io reserves all rights to this article. Reposting of this article will be permitted provided Gate.io is referenced. In all other cases, legal action will be taken due to copyright infringement.

Share with：
Follow us：
Trending
UST Decoupled from the US Dollar and LUNA Slumped by 60%
Luna Fell by More than 95% in a Single Day. What Is the "Death Spiral" Leading to Hell?
The Whole Story of Musks Acquisition of Twitter
Optimism Released an Article to Recall the Course of the Project, Maybe Will Airdrop Management Tokens
Luna Chain Reaction Poses Significant Capital Loss, and the Security of DeFi Financial Products Initiates Dispute
Claim 20 Point now
Exclusively for Newcomers: complete 2 steps to claim Point immediately!